This is the moment a bird strikes the cockpit windscreen of a Boeing 737 mid-flight and causes the shocked pilot to drop his phone.

The pilot had been filming the landscape through the cockpit window with his smartphone at the time.

The footage shows fields below with the plane turning slightly left and right to stay on course when the bird struck the glass with a huge bang.

The video shows the twinjet airliner flying straight into the poor bird that is heading away from the plane and the pilot the drops the camera in shock.

Local media including life.ru and new9.ru said the incident took place over an unspecified location but involved a Russian airline, as they noted that when the pilot dropped the phone, he curses in Russian, saying “oh, damn!”

It is unclear whether the windscreen was damaged by the impact or whether the unspecified flight was affected.

Bird strikes can be a significant risk to planes and are more common at lower altitudes as they come into land or take off.

However although a shock when they hit the fuselage or the window, the risk is less severe except in the unlikely instances when the window breaks, which can cause injury to the pilots inside from breaking glass and depressurisation.

Industry experts warn that the greater risk is when the birds are sucked into the engine, which can lead to loss of power at a crucial stage in flight.

The video was posted on YouTube by the channel ‘WBR Avia’ who said the plane was a Boeing 737.

YouTube subscriber ‘Gideon’ wondered: “Shouldn’t the pilots receive notification when an object is approaching directly at the aircraft?” 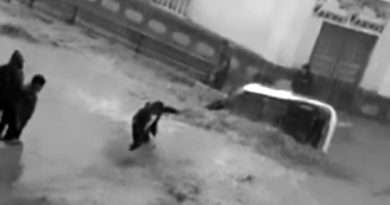 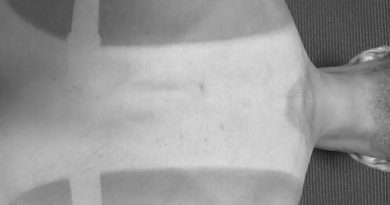