An aquarium that has spent 15 years raising this female shark have finally been rewarded after she gave birth to this cute baby shark.

Many sharks are notoriously difficult to breed in captivity and this baby grey reef shark (Carcharhinus amblyrhynchos) was born in the Oceanographic aquarium located in the architectural complex of the City of Arts and Sciences in the city of Valencia in Spain.

The baby’s mother, named Choto, has been in the aquarium for 15 years where staff had always hoped she might feel good enough to eventually breed after she reached sexual maturity.

That took 15 years and now they have been rewarded for their loving care with this newborn measuring around 50 centimetres (20 inches) in length and weighing just 750 grams (1.6 lbs).

In the video, the baby shark can be seen swimming around its tank before workers at the aquarium fish it out to measure and weigh it.

The shark was kept in a paddling pool whilst it was out of its normal tank.

The birth represents a success for the conservation policy of the aquarium.

One of the advantages of being born in the aquarium is that the animal will receive training to pass veterinarian controls without suffering stress as it will be used to being handled.

There are 17 grey reef sharks at the Oceanographic aquarium.

The grey reef shark is from the family Carcharhinidae. This species is most often seen in shallow water and are fast-swimming, agile predators. They are native to the Indian and Pacific oceans. They are listed as a near-threatened species. 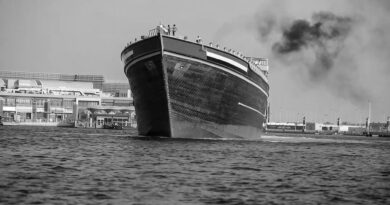 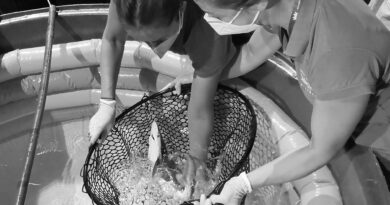 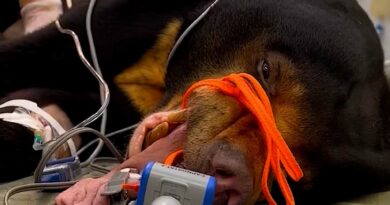