This is the moment a heartless security guard beats a begging mother with a mop handle before it breaks in two as she carries a young child and another tot watches on.

The unnamed woman, who is reportedly a known beggar at a bus station in the city of Zalau in the north-western Romanian county of Salaj, was filmed being attacked by onlookers inside a minibus.

The reason behind the alleged attack is currently unknown.

In the video posted on Facebook and viewed 887,000 times, the woman is seen brandishing something in her hand as she holds a young child in the other.

Meanwhile, the security guard in a blue shirt is seen marching up to her while holding a mop.

He swings the pole at her as she holds the young child, and then takes aim again.

The woman screams at him before he tries to hit her again, however the pole appears to strike the ground and split in two.

The clip ends with the beggar throwing her bag at the guard’s head before turning to run.

According to local media, the local police have not yet received an official complaint, and are therefore unable to open an investigation.

One netizen commented: “I cannot watch the video without crying. Shame on that thug who cannot be called a man.”

Another online user said: “They just multiply, beg and live for the benefits they don’t deserve! I do not feel sorry for the woman at all. I would be great to see all the useless people disappear. She must have done something to make the man crazy.”

A netizen added: “Does no one else see the woman defending herself with her own baby? It’s obvious the man is only trying to hit her feet, but the ‘poor’ woman uses her child as a shield!” 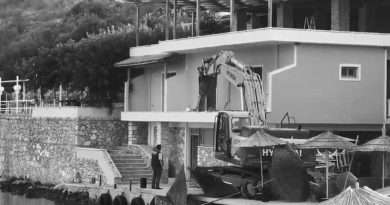 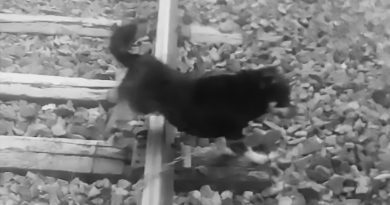 Manhunt For Bank Guard Who Ran Off With 4.8 Million GBP