This is new footage of a so-called ‘million dollar panda’ trapping its leg between two tree trunks while its pal tries to push it free before being distracted by a tasty bamboo shoot.

The footage supplied to Asia Wire by Ms Li was captured at the Dujiangyan Panda Base in Chengdu, capital of Sichuan Province in south-western China, during a family visit on 28th March.

In the video, male giant panda (Ailuropoda melanoleuca) cub ‘Tu Dou’ – Mandarin for ‘potato’ – can be seen yelping in distress as his right hind leg is caught in the gap between two tree trunks.

According to Ms Li, who was with her husband and son on the day, the cub had tried to climb between the two trunks when he trapped himself.

Tu Dou’s friend pushes and pulls at his fur in an apparent attempt to free him, with staff members at the panda case eventually turning up to help.

The rescue panda is still trying to help Tu Dou when it is suddenly handed a fresh bamboo shoot and becomes totally distracted.

Tu Dou’s friend rolls onto its back and begins noshing on the treat, completely forgetting about its stranded mate, the footage shows.

During the rescue, which Ms Li said continued for more than 10 minutes, staff members can be seen trying to push and lift Tu Dou out of the gap.

But the panda bear is stuck too tightly in the tree, and he too has to be appeased with bamboo as the employees begin hacking away at the thick trunk with a machete.

The blundering bear cub, who is just over a year old, is eventually saved when the heavy trunk is broken – and then accidentally dropped on his back.

Tu Dou, who was apparently not harmed, scampers away as the video ends.

Ms Li’s family visited the panda base just three days after it reopened to the public amid the coronavirus outbreak.

She told Asia Wire: “My husband and I drove all the way there for our child on Saturday.

“We came across the poor cub stuck in the tree. It’s just over a year old.”

Her husband Mr Li said: “They weren’t very professional. They just chopped the whole thing down!”

Pandas reportedly cost 1 million USD (810,520 GBP) per year to lease to zoos around the world and are dubbed ‘million dollar Pandas’ in China.

Mr Li said his family have been offered a one-year free pass to the panda research facility for documenting the hilarious incident. 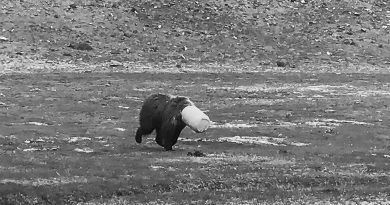 Bear With Head Stuck In Plastic Bucket Freed By Firemen 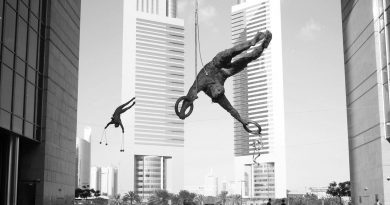 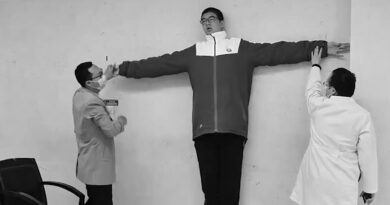