This is the moment a man vaults two barriers and fights his way through busy traffic to save a kitten from being squashed by a minibus on the road.

The incident was filmed by a motorist in an unspecified location in Turkey and later posted on social media where it has been widely shared.

In the footage, the unnamed man wearing a white shirt is seen leaping over the central reservation on a busy motorway.

The brave man hurdles the last crash barrier and runs into the oncoming traffic, directing motorists with a raised palm of his hand.

He then runs into the road and scoops something up off the tarmac right next to a minibus.

As the minibus edges along, the man appears to grab the object from under its wheel.

He then runs back across the road holding something in his hands as the filming onlookers inside a stationary vehicle are heard laughing in the background.

The witnesses shout “bravo” and applaud the smiling man as he reveals he has a cute fluffy kitten in his hands.

Netizens had a lot to say about the man’s heroic exploits, with ‘Imparator2018’ commenting: “Congratulations, you are a truly kindhearted fellow.”

‘Speady31’ wrote: “Well done man! A human is only moral when he has a conscience!” 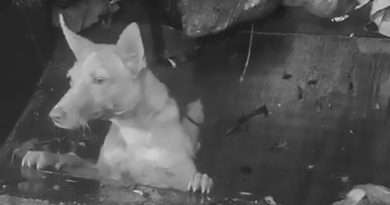 Dumped Dog Saved In Nick Of Time From Dustcart Crusher 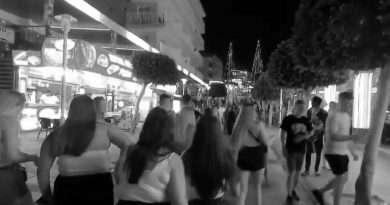 Law Bans All You Can Drink Hols In Brit Holiday Hotspot